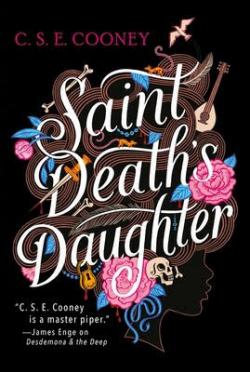 Lanie Stones, the daughter of the Royal Assassin and Chief Executioner of Liriat, has never led a normal life. Born with a gift for necromancy and a literal allergy to violence, she was raised in isolation in the family's crumbling mansion by her oldest friend, the ancient revenant Goody Graves.

When her parents are murdered, it falls on Lanie and her cheerfully psychotic sister Nita to settle their extensive debts or lose their ancestral home--and Goody with it. Appeals to Liriat's ruler to protect them fall on indifferent ears... until she, too, is murdered, throwing the nation's future into doubt.

Hunted by Liriat's enemies, hounded by her family's creditors and terrorised by the ghost of her great-grandfather, Lanie will need more than luck to get through the next few months--but when the goddess of Death is on your side, anything is possible.

C. S. E. Cooney lives in Queens, New York. She won the World Fantasy Award for her collection Bone Swans in 2016. Her new collection, Dark Breakers, featuring stories set in the same world as Desdemona and the Deep (Tor.com, 2019), came out from Mythic Delirium in February 2022. Her novel Saint Death’s Daughter debuts with Solaris in April 2022. Currently, she and her husband, author Carlos Hernandez, are co-developing a TTRPG about “Inquisition and Aliens” called Negocios Infernales, forthcoming from Outland Entertainment.

Lanie Stones, the daughter of the Royal Assassin and Chief Executioner of Liriat, has never led a normal life.

"Welcome to a Gilded Era like you've never before known and will never be able to forget ... If Titania herself were to commission a book, it would be this one."