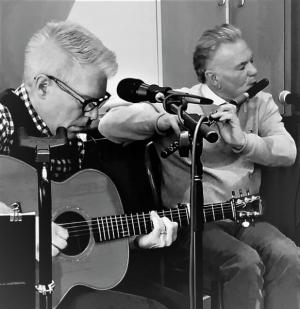 Savoy Bookshop & Café presents a live acoustic concert with Executive Session (Skip McKinley and Greg Bacon). General admission tickets are $12, and the event will be limited to 80 people.

Executive Session's music is an innovative blend of Irish, Scottish, and American tradition. It is rare that this breadth of music is interpreted on a granadilla wood flute, guitar and voice. The sailing ballads from guitarist Greg Bacon are ones one you will not forget.

Flutist Skip McKinley stepped into the Boston music scene in 1977 and quickly became an intrinsic part of the thriving Irish session community. In 1981, he won both the solo and trio All-Ireland competitions in New York and performed with the well-known Lewis Family and fiddle player Martin Hayes at the Festival Interceltic in L'Orient, France. Major influences to McKinley's style have been the flute and piping traditions of County Clare. Originally from Missouri, he now lives in Stonington, CT.

Skip has released two CD albums “The Executive Session” and “Fairytales” and is about to release the third titled “Live at La Grua.”

Greg Bacon has been making music on fife, flute, whistle, tenor banjo and guitar for more than three decades. He has travelled all over the world playing music. Greg is also a songwriter and released two collections: “Sea over Bow” in July 2018 and "the Last Chorus” in 2016.