SAVOY: Lynne Reeves (The Dangers of an Ordinary Night) Author Talk and Q&A with Jeanne Blasberg

Savoy Bookshop & Café presents an author talk and Q&A with Lynne Reeves for the new book, The Dangers of an Ordinary Night. Lynne will be in conversation with local author Jeanne Blasberg (Eden: A Novel, The Nine). 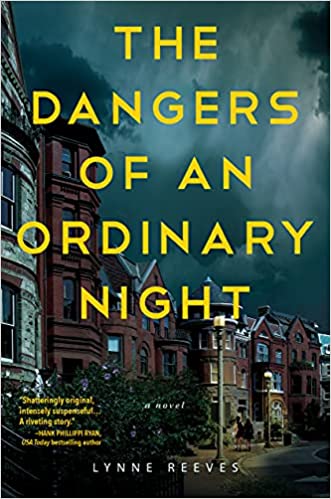 Perfect for fans of Celeste Ng and Megan Abbott, Lynne Reeves' The Dangers of an Ordinary Night is an exploration of the explosive family secrets that are often hidden in plain sight.

On a chilly fall evening at the prestigious Performing Arts High School of Boston, best friends Tali Carrington and June Danforth go missing after auditioning for a play. They're last seen in grainy, out-of-focus surveillance footage that shows them walking away from the school. Two days later in a town south of Boston, Tali is found disoriented and traumatized by the ocean's edge, while June is pronounced dead at the scene.

Tali's mother, Nell, is so bent on protecting her daughter from further emotional harm that she ignores rumors of her husband’s involvement and enlists the help of Cynthia Rawlins, a reunification therapist with personal insight into the riptide that hides below the surface of every unsuspecting family. Meanwhile, Detective Fitz Jameson uncovers a criminal undertow involving the high school’s overachieving students, and finally sees an opportunity for personal redemption from a secret that’s haunted him for years.

As Nell, Cynthia, and Fitz confront their own contributions to the scandals that beleaguer them, their lives turn out to be more deeply intertwined than they'd ever imagined. In the end, they must decide what lengths they're willing to go to protect the people they love while also saving themselves.

Jeanne Blasberg is an award-winning and bestselling author and essayist. Her most recent book, The Nine (She Writes Press 2019) has been honored with the Foreword Indies Gold Award in Thriller & Suspense, Juror’s Choice in the National Indie Excellence Awards, and additional awards from Chanticleer, the International Book Awards, Reader’s Favorite, and more. Eden (She Writes Press 2017), is the winner of the Beverly Hills Book Awards for Women’s Fiction and finalist for both the Benjamin Franklin Award for Best New Voice in Fiction and the Sarton Women’s Book Award for Historical Fiction.

The Dangers of an Ordinary Night: A Novel (Hardcover)

Perfect for fans of Celeste Ng and Megan Abbott, Lynne Reeves' The Dangers of an Ordinary Night is an exploration of the explosive family secrets that are often hidden in plain sight.