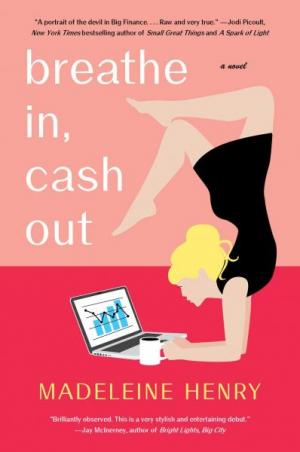 Savoy Bookshop & Café presents an open house book signing with Madeleine Henry, the author of the novel Breathe In, Cash Out. This event is free and open to the public.

In this sizzling debut for fans of The Devil Wears Prada, Wall Street banking analyst Allegra Cobb plans to quit the minute her year-end bonus hits her account, finally pursuing her yoga career full-time. But when she forms an intense relationship with the #InstaFamous guru who may hold the ticket to the life Allegra's always wanted—she's not sure if she'll be able to keep her sanity intact (and her chakras aligned) until bonus day.

But her plan isn’t quite as perfect as the beachfront yoga pictures she double-taps on Instagram. On top of the 100 emails an hour and coworkers already suspicious of her escape plan, Allegra's hard-driving single father has always expected fiercely high achievement above all else. That his daughter works on Wall Street means everything to him. Still, she marches on, taking it day by extremely caffeinated day.

But after (1) unknowingly sleeping with the man now leading her banking cohort on one of their biggest deals to date and (2) meeting the #blessed yoga guru who might just be her ticket to the life she’s always wanted, it really hits her: her happy-ever-after will be harder to manifest than she thought.

Fast-paced, laugh-out-loud funny, and totally irresistible, this is the story of a fearless young woman determined to center herself in the life she truly wants.

Madeleine Henry worked at Goldman Sachs and in investment management in New York City. She graduated from Yale in 2014 where she wrote comedy for The Yale Record, America’s oldest college humor magazine. Now working on her second novel, she shares more information about her life, writing, and yoga practice on @MadeleineHenryYoga. Breathe In, Cash Out is her debut.

Breathe In, Cash Out: A Novel (Hardcover)

“For when you want the ultimate beach read...Enter Madeleine Henry’s Breathe In, Cash Out. It’s The Devil Wears Prada meets Wall Street.” —The Skimm

“This is a portrait of the devil in Big Finance, which promises untold riches in return for serving an inhumane master.