Bank Square Books and Savoy Bookshop & Café are delighted to present our Holiday Gift Guide Book Signing Series. Purchase a personalized book as a gift for a loved one, and we'll gift wrap and mail it to them for free! If you can't attend the event, you can purchase the book online and let us know in the comments if you'd like it signed or personalized. We'll take care of the rest!

Savoy Bookshop & Café will host an author talk and book signing with William McKeever, the author of Emperors of the Deep: Sharks—the Ocean's Most Misunderstood, and Most Important Guardians. This event will be hosted in partnership with the Living Sharks Museum, and Savoy will donate 20% of profits to shark research and conservation. 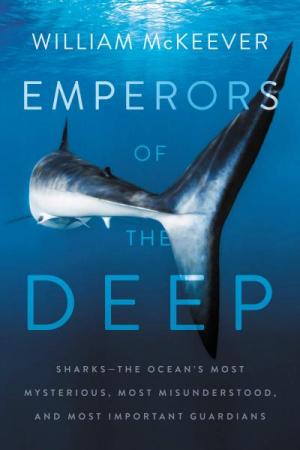 Book: Emperors of the Deep: Sharks—The Ocean's Most Mysterious, Most Misunderstood, and Most Important Guardians, by William McKeever

“Emperors of the Deep is a must-read for anyone in love with our oceans and concerned with averting the looming ecological destruction of our planet. McKeever brings to light the importance of sharks and their role as ancient guardians of the seas.”—John Hocevar, Oceans Campaign Director, Greenpeace USA

When Steven Spielberg released Jaws in the summer of 1975, his adaptation of Peter Benchley’s novel forever type-cast sharks as bloodthirsty man-eaters. But, as we all worried whether it was safe to go back into the water, we failed to notice that while sharks account fewer than four human fatalities per year, humans needlessly kill 100 million sharks per year, which has made the species vulnerable for the first time in its existence and put the future of the world’s oceans at risk.

At once a deep-dive into the misunderstood world of sharks—specifically, great whites, makos, hammerheads, and tigers—and an urgent call to protect them, Emperors of the Deep tells the true story about the ocean’s most mysterious, most misunderstood, and most important guardians. From the family-friendly waters of Cape Cod to the coral reefs of the Central Pacific, where great whites mysteriously congregate every fall in what scientists refer to as Burning Man for white sharks, Safeguard the Seas founder William McKeever introduces us to scientists, conservationists, and world-renowned shark experts who have started unlocking the species’ most closely guarded secrets. He also profiles activists around the world fighting to protect sharks and infiltrates a mako-only shark tournament in Montauk to figure out why fishermen continue to hunt them despite their declining numbers. And, to get a close-up view of these underwater emperors and empresses, he enters freely into their world, encountering the 420-million-yeard-old species that continues to capture our imagination.

A rollicking, eye-opening underwater adventure, Emperors of the Deep will shift our perception of sharks from coldblooded underwater predators to evolutionary marvels that play an integral part in maintaining the health of the world’s oceans.

“As illuminating as it is entertaining, this book will make you view sharks in a whole new light, revealing their mysteries without forsaking their wonder.”—Dane Huckelbridge, author of No Beast So Fierce: The Terrifying True Story of the Champawat Tiger, the Deadliest Animal in History

Emperors of the Deep: Sharks--The Ocean's Most Mysterious, Most Misunderstood, and Most Important Guardians (Hardcover)

“Emperors of the Deep is a must-read for anyone in love with our oceans and concerned with averting the looming ecological destruction of our planet. McKeever brings to light the importance of sharks and their role as ancient guardians of the seas.”—John Hocevar, Oceans Campaign Director, Greenpeace USA