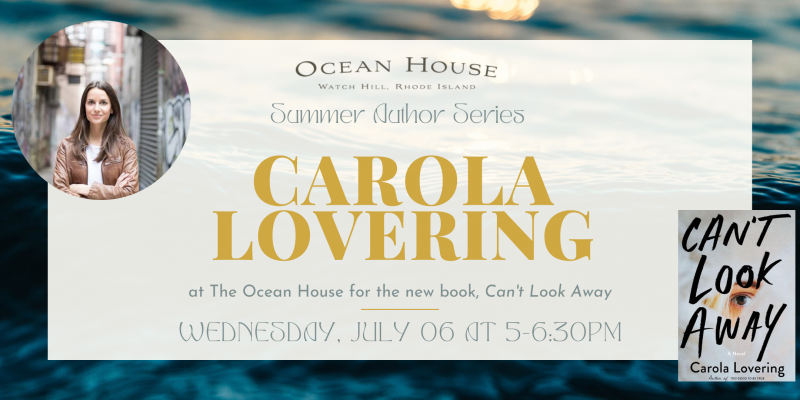 Tickets to this event are $35.00 (plus taxes and service charge) and can be purchased by clicking the link below. Each ticket will include a copy of the event book.

In 2013, twenty-three-year old Molly Diamond is a barista, dreaming of becoming a writer. One night at a concert in Brooklyn, she locks eyes with the lead singer, Jake Danner, and can’t look away. Molly and Jake fall quickly and deeply in love, especially after he writes a hit song about her that puts his band on the map.

Nearly a decade later, Molly has given up writing and is living in Flynn Cove, Connecticut with her young daughter and her husband Hunter―who is decidedly not Jake Danner. Their life looks picture-perfect, but Molly is lonely; she feels out of place with the other women in their wealthy suburb, and is struggling to conceive their second child. When Sabrina, a newcomer in town, walks into the yoga studio where Molly teaches and confesses her own fertility struggles, Molly believes she's finally found a friend.

But Sabrina has her own reasons for moving to Flynn Cove and befriending Molly. And as Sabrina’s secrets are slowly unspooled, her connection to Molly becomes clearer––as do secrets of Molly's own, which she’s worked hard to keep buried.

Meanwhile, a new version of Jake's hit song is on the radio, forcing Molly to confront her past and ask the ultimate questions: What happens when life turns out nothing like we thought it would, when we were young and dreaming big? Does growing up mean choosing with your head, rather than your heart? And do we ever truly get over our first love?

Carola Lovering is the author of the novels Tell Me Lies, Too Good to Be True, and the forthcoming Can’t Look Away. She is a graduate of Colorado College, and her work has appeared in New York Magazine (The Cut), W Magazine, National Geographic, Outside, and Yoga Journal, among other publications. Her novel, Tell Me Lies, is currently being adapted into a television series for Hulu that will air in 2022. She lives in Connecticut with her husband and son.

Can't Look Away: A Novel (Hardcover)

"Lovering delivers another winner...a propulsive page-turner about young love and second chances. You won’t be able to put this down." —Laura Dave, #1 New York Times bestselling author of The Last Thing He Told Me

"Fans of Gillian Flynn and Paula Hawkins will enjoy this one." —Publishers Weekly