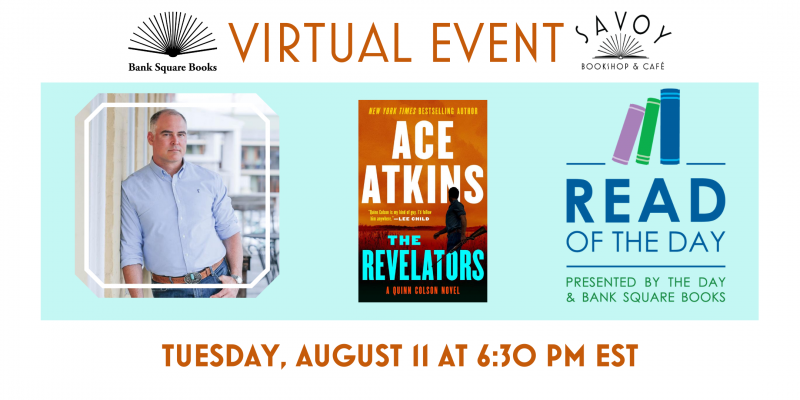 Bank Square Books presents a virtual author talk and Q&A with author Ace Atkins for the release of his book, The Revelators. Ace will be in conversation with Rick Koster of The Day as part of a new book club, Read of The Day, co-hosted by The Day and Bank Square Books. This event is free and open to the public, but you will need to register to join the Crowdcast Stream.

In this gripping new crime novel from the New York Times-bestselling author, Quinn Colson returns to take down a criminal syndicate that has ravaged his community, threatened his family, and tried to have him killed.

Shot up and left for dead, Sheriff Quinn Colson has revenge on his mind. With the help of his new wife Maggie, rehabilitation, and sheer force of will, he's walking again, eager to resume his work as a southern lawman and track down those responsible for his attempted murder. But someone is standing in his way: an interim sheriff, appointed by the newly elected Governor Vardaman, the man who Quinn knows ordered his murder. Vardaman sits at the top of the state's power structure--both legal and criminal--and little does he know, Quinn is still working to take him down.

Quinn will enlist the help of his most trusted friends, including federal agent Jon Holliday, U.S. Marshal Lillie Virgil, and Nat Wilikins, an undercover agent now working for crime queen Fannie Hathcock. Since Quinn's been gone, the criminal element in north Mississippi has flourished, with Hathcock enjoying unbridled freedom. Now as a bustling factory shuts down, a labor leader ends up dead, and Quinn's own nephew goes missing, everything looks to be unraveling. Even an old friend from Quinn's past, Donnie Varner, is out of jail and up to his own ways.

Quinn Colson and company have been planning for years, and now they're finally ready to bust apart a criminal empire running on a rigged system for far too long. This is the Battle of Jericho, the epic showdown that's been years in the making. Eventually, the war will end--for better or worse.

Ace Atkins is the author of twenty-three books, including eight Quinn Colson novels, the first two of which, The Ranger and The Lost Ones, were nominated for the Edgar Award for Best Novel (he has a third Edgar nomination for his short story "Last Fair Deal Gone Down"). He is the author of seven New York Times-bestselling novels in the continuation of Robert B. Parker's Spenser series. Before turning to fiction, he was a correspondent for the St. Petersburg Times and a crime reporter for the Tampa Tribune, and he played defensive end for Auburn University football.

In this gripping new crime novel from the New York Times-bestselling author, Quinn Colson returns to take down a criminal syndicate that has ravaged his community, threatened his family, and tried to have him killed.