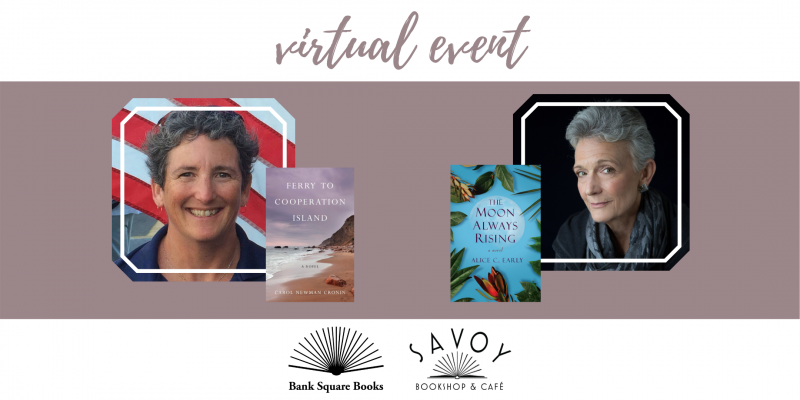 Bank Square Books and Savoy Bookshop & Café present a virtual author event with Carol Newman Cronin, author of Ferry to Cooperation Island, who will be in conversation with Alice C. Early, author of The Moon Always Rising. This event is free and open to the public, but you will need to register to join the Crowdcast Stream.

About Ferry to Cooperation Island

He’s never had to compete for a job before—and she fights like a girl.

Loner James Malloy is a ferry captain—or used to be, until he was unceremoniously fired and replaced by Courtney Farris. Now, instead of piloting Brenton Island’s daily lifeline to the glitzy docks of Newport, Rhode Island, James spends his days beached, bitter, and bored.

When he discovers a private golf course staked out across wilderness sacred to his dying best friend, a Narragansett Indian, James is determined to stop such “improvements.” But despite Brenton’s nickname as “Cooperation Island,” he’s used to working solo. To keep rocky bluffs, historic trees, and ocean shoreline open to all, he’ll have to learn to work with other islanders—including Captain Courtney, who might just morph from irritant to irresistible once James learns a secret that’s been kept from him for years.

Carol Newman Cronin is an award-winning writer of stories about boats and waterfront personalities. A lifetime sailor, she won two races at the 2004 Olympics and continues to compete at events around the world.

About The Moon Always Rising

An abandoned only child who’s never known why her mother left her at two, Eleanor “Els” Gordon grows up feisty and prickly, craving belonging that eludes her. After tragedy erases her marriage plans, her father’s death leaves financial and emotional wreckage, and her career crumbles under workplace harassment, she flees her native Scotland for a derelict plantation house on the tiny Caribbean island of Nevis. She soon realizes she’s cohabiting with the jumbie (ghost) of Jack Griggs, her home’s former owner, and that neither can move on without the other’s help. Can Els enable Jack to find his release by atoning for wrongs committed during his Casanova life? Will Els allow Jack to play cupid on behalf of a local charter captain? When Jack prods Els to risk inviting her estranged mother to Nevis and demanding answers, will the shattering truth free her to welcome love into her life again?

While sweeping readers from the Scottish highlands to the lush tropics, this novel is a multi-layered love story about the meaning of home and the power of forgiveness.

Alice C. Early’s career spans academia, commercial real estate, international executive recruiting, and career-transition coaching. Her college English/creative writing major and professional roles requiring listening and shaping stories eventually pointed her back to her first love―writing fiction. Within the Martha’s Vineyard community she cherishes, Alice sings in a local group and fosters sustainability and women’s rights and voices. An avid cook, she nurtures friends and neighbors with local bounty and her experiments in gluten-free baking. Alice and her husband have visited Nevis annually since 1996 and otherwise share a hand-built life in view of the sea.

Loner James Malloy is a ferry captain--or used to be, until he was unceremoniously fired and replaced by a girl named Courtney Farris. Now, instead of piloting Brenton Island's daily lifeline to the glitzy docks of Newport, Rhode Island, James spends his days beached, bitter, and bored.

In 1998, fiery Eleanor "Els" Gordon thought the new century would find her married to her childhood soul mate, rejuvenating her family's Scottish Highlands estate, and finally earning a managing director title at her investment bank. Maybe she'd even have the courage to discover why her estranged mother ran home to Italy thirty years earlier.