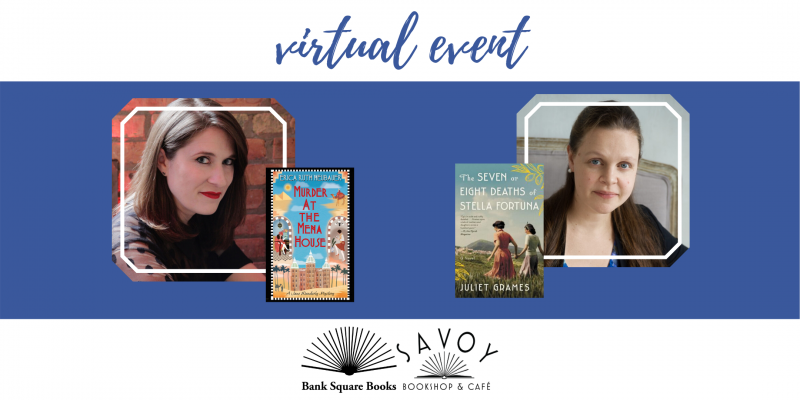 Bank Square Books and Savoy Bookshop & Café presents a virtual event with Erica Ruth Neubauer, author of Murder at the Mena House, who will be in conversation with author Juliet Grames author of The Seven or Eight Deaths of Stella Fortuna. This event is free and open to the public, but pre-registration on eventbrite is required to join the Crowdcast. Please Note: The time of this event has been changed to 7:00 P.M.

Copies of Murder at the Mena House and The Seven or Eight Deaths of Stella Fortuna purchased through the event links will receive a signed book plate.

About Murder at the Mena House

Well-heeled travelers from around the world flock to the Mena House Hotel—an exotic gem in the heart of Cairo where cocktails flow, adventure dispels the aftershocks of World War I, and deadly dangers wait in the shadows . . .

Egypt, 1926. Fiercely independent American Jane Wunderly has made up her mind: she won’t be swept off her feet on a trip abroad. Despite her Aunt Millie’s best efforts at meddling with her love life, the young widow would rather gaze at the Great Pyramids of Giza than into the eyes of a dashing stranger. Yet Jane’s plans to remain cool and indifferent become ancient history in the company of Mr. Redvers, a roguish banker she can’t quite figure out.

While the Mena House has its share of charming guests, Anna Stainton isn’t one of them. The beautiful socialite makes it clear that she won’t share the spotlight with anyone—especially Jane. But Jane soon becomes the center of attention when she’s the one standing over her unintentional rival’s dead body.

Now, with her innocence at stake in a foreign country, Jane must determine who can be trusted, and who had motive to commit a brutal murder. Between Aunt Millie’s unusual new acquaintances, a smarmy playboy with an off-putting smile, and the enigmatic Mr. Redvers, someone has too many secrets. Can Jane excavate the horrible truth before her future falls to ruin in Cairo . . . and the body count rises like the desert heat?

Erica Ruth Neubauer spent eleven years in the military, nearly two as a Maryland police officer, and one as a high school English teacher, before finding her way as a writer. She has been a reviewer of mysteries and crime fiction for publications such as Publishers Weekly and Mystery Scene Magazine for several years, and she’s a member of Sisters in Crime and Mystery Writers of America. Erica Ruth lives in Milwaukee, WI, with her husband.

Juliet Grames was born in Hartford, Connecticut, and grew up in a tight-knit Italian-American family. A book editor, she has spent the last decade at Soho Press, where she is associate publisher and curator of the Soho Crime imprint.The Seven or Eight Deaths of Stella Fortuna is her first novel. It is being published in the United States, Canada, and the Philippines by Ecco/HarperCollins; in the United Kingdom and Australia by Hodder & Stoughton; in Italy by HarperCollins Italia; in Germany by Droemer Knaur; in the Netherlands and Belgium by Luitingh; in Russia by Eksmo; in Poland by Wydawnictwo Otwarte; in Lithuania by Alma Littera; in Spanish throughout the world by Alianza de Novelas; in France by Presses de la Cite; and in Hebrew by Matar

About The Seven or Eight Deaths of Stella Fortuna

For Stella Fortuna, death has always been a part of life. Stella’s childhood is full of strange, life-threatening incidents—moments where ordinary situations like cooking eggplant or feeding the pigs inexplicably take lethal turns. Even Stella’s own mother is convinced that her daughter is cursed or haunted.

In her rugged Italian village, Stella is considered an oddity—beautiful and smart, insolent and cold. Stella uses her peculiar toughness to protect her slower, plainer baby sister Tina from life’s harshest realities. But she also provokes the ire of her father Antonio: a man who demands subservience from women and whose greatest gift to his family is his absence.

When the Fortunas emigrate to America on the cusp of World War II, Stella and Tina must come of age side-by-side in a hostile new world with strict expectations for each of them. Soon Stella learns that her survival is worthless without the one thing her family will deny her at any cost: her independence.

In present-day Connecticut, one family member tells this heartrending story, determined to understand the persisting rift between the now-elderly Stella and Tina. A richly told debut, The Seven or Eight Deaths of Stella Fortuna is a tale of family transgressions as ancient and twisted as the olive branch that could heal them.

To attend this virtual event, you will need access to the internet and a computer or other “smart” device to stream the content. The Crowdcast platform streams through your web browser, so you will not need to download any additional software.

Murder at the Mena House (A Jane Wunderly Mystery #1) (Hardcover)

Well-heeled travelers from around the world flock to the Mena House Hotel—an exotic gem in the heart of Cairo where cocktails flow, adventure dispels the aftershocks of World War I, and deadly dangers wait in the shadows . . .

The Seven or Eight Deaths of Stella Fortuna: A Novel (Paperback)