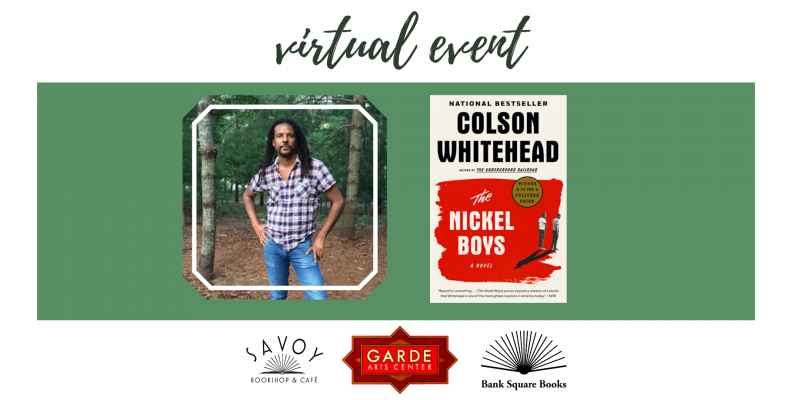 Bank Square Books and Savoy Bookshop & Café, in partnership with The Garde Arts Center, present a virtual author talk and Q&A with Pulitzer Prize winner and bestselling author Colson Whitehead for the paperback release of his New York Times bestselling book, The Nickel Boys. Colson Whitehead's talk will begin at 7pm on Crowdcast. John F. McKnight Jr., Dean of Institutional Equity and Inclusion at Connecticut College will introduce Colson, and moderate the Q&A portion of the event.

Tickets for this event are $17.00 and include a new paperback copy of The Nickel Boys and access to the virtual event on Crowdcast. Your book will be mailed via USPS media mail after the event or fulfilled via curbside pickup at Bank Square Books; should you wish to upgrade the shipping please select the priority mail option during the checkout. You will receive a link and password to stream the event via Crowdcast on the day of the virtual event. A portion of the ticket proceeds will be donated to The Garde Arts Center, a non-profit arts center.

WINNER OF THE PULITZER PRIZE

WINNER OF THE KIRKUS PRIZE

LONGLISTED FOR THE NATIONAL BOOK AWARD

LONGLISTED FOR THE ORWELL PRIZE FOR POLITICAL FICTION 2020

In this bravura follow-up to the Pulitzer Prize and National Book Award-winning #1 New York Times bestseller The Underground Railroad, Colson Whitehead brilliantly dramatizes another strand of American history through the story of two boys sentenced to a hellish reform school in Jim Crow-era Florida.

When Elwood Curtis, a black boy growing up in 1960s Tallahassee, is unfairly sentenced to a juvenile reformatory called the Nickel Academy, he finds himself trapped in a grotesque chamber of horrors. Elwood’s only salvation is his friendship with fellow “delinquent” Turner, which deepens despite Turner’s conviction that Elwood is hopelessly naive, that the world is crooked, and that the only way to survive is to scheme and avoid trouble. As life at the Academy becomes ever more perilous, the tension between Elwood’s ideals and Turner’s skepticism leads to a decision whose repercussions will echo down the decades.

Based on the real story of a reform school that operated for 111 years and warped the lives of thousands of children, The Nickel Boys is a devastating, driven narrative that showcases a great American novelist writing at the height of his powers.

Colson Whitehead is the #1 New York Times bestselling author of The Underground Railroad, which in 2016 won the Pulitzer Prize in Fiction and the National Book Award and was named one of the Ten Best Books of the Year by The New York Times Book Review, as well as The Noble Hustle, Zone One, Sag Harbor, The Intuitionist, John Henry Days, Apex Hides the Hurt, and The Colossus of New York. He is also a Pulitzer Prize finalist and a recipient of the MacArthur and Guggenheim Fellowships. He lives in New York City.

The Nickel Boys: A Novel (Paperback)

WINNER OF THE PULITZER PRIZE

ONE OF THE BEST BOOKS OF THE YEAR

The Underground Railroad: A Novel (Paperback)