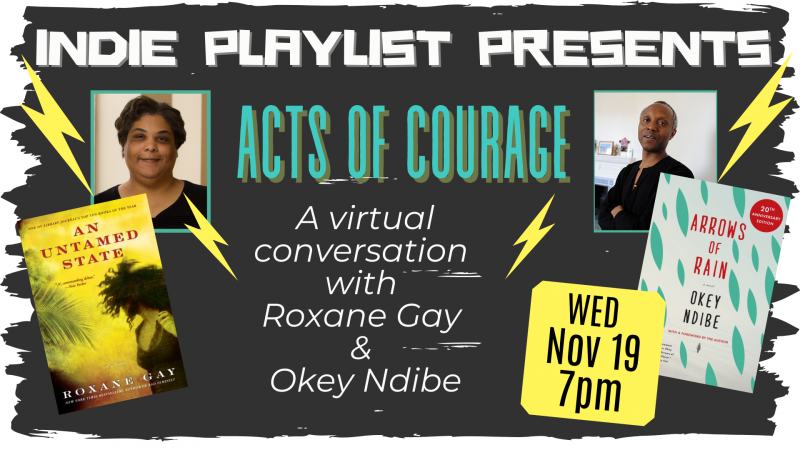 The two writers will discuss their brilliant debut novels and explore the concept of courage amid chaos.

This is an Indie Playlist event, created to support your local independent bookstore!

Roxane Gay's writing has appeared in Best American Short Stories 2012, Best Sex Writing 2012, Oxford American, American Short Fiction, Virginia Quarterly Review, NOON, The New York Times Book Review, The Rumpus, Salon, The Wall Street Journal's Speakeasy culture blog, and many others including her Tumblr, roxanegay.tumblr.com. She is the co-editor of PANK and essays editor for The Rumpus. She teaches writing at Eastern Illinois University. She tweets at @rgay.

Okey Ndibe first came to the US to act as founding editor of African Commentary, a magazine published by Chinua Achebe. He has taught at Brown University, Connecticut College, Simon’s Rock College, Trinity College, and the University of Lagos (as a Fulbright scholar). His award-winning journalism has appeared in The New York Times, The Guardian, and the Hartford Courant, where he served on the editorial board. He earned his MFA and PhD from the University of Massachusetts at Amherst. His second novel, Foreign Gods, Inc., was selected by New York Times critic Janet Maslin as one of her 10 favorite books of 2014. Mr. Ndibe lives in West Hartford, CT, with his wife, Sheri, and their three children.

An Untamed State: Roxane Gay is a powerful new literary voice whose short stories and essays have already earned her an enthusiastic audience. In An Untamed State, she delivers an assured debut about a woman kidnapped for ransom, her captivity as her father refuses to pay and her husband fights for her release over thirteen days, and her struggle to come to terms with the ordeal in its aftermath. Mireille Duval Jameson is living a fairy tale. The strong-willed youngest daughter of one of Haiti's richest sons, she has an adoring husband, a precocious infant son, by all appearances a perfect life. The fairy tale ends one day when Mireille is kidnapped in broad daylight by a gang of heavily armed men, in front of her father's Port au Prince estate. Held captive by a man who calls himself The Commander, Mireille waits for her father to pay her ransom. As it becomes clear her father intends to resist the kidnappers, Mireille must endure the torments of a man who resents everything she represents. An Untamed State is a novel of privilege in the face of crushing poverty, and of the lawless anger that corrupt governments produce. It is the story of a willful woman attempting to find her way back to the person she once was, and of how redemption is found in the most unexpected of places. An Untamed State establishes Roxane Gay as a writer of prodigious, arresting talent.

Arrows of Rain:  In the country of Madia (based in part on Ndibe's native Nigeria) a young sex worker runs into the sea and drowns. The last man who spoke to her, the "madman" Bukuru, is asked to account for her last moments. When his testimony implicates the Madian armed forces, Bukuru is arrested and charged with her death. At the first day of trial, Bukuru, acting as his own attorney, counters these charges with allegations of his own, speaking not only of government complicity in a series of violent assaults and killings but telling the court that the president of Madia himself is guilty of rape and murder. The incident is hushed up, and Bukuru is sent back to prison, where he will likely meet his end. But a young journalist manages to visit him, and together they journey through decades of history that illuminate Bukuru's life, and that of the entire nation. A brave and powerful work of fiction, Arrows of Rain continues to resonate as a necessary morality tale and a brilliant dramatization of the complex factors behind the near-collapse of a nation from one of the most exciting novelists writing today.

"Once you start this book, you will not be able to put it down. An Untamed State is a novel of hope intermingled with fear, a book about possibilities mixed with horror and despair.