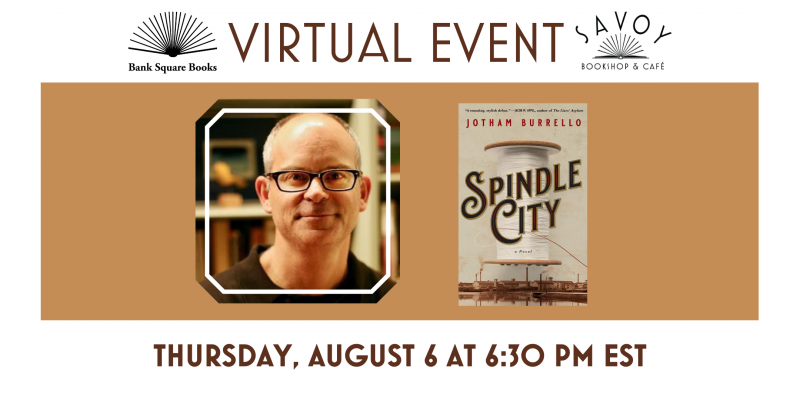 Bank Square Books and Savoy Bookshop & Café present a virtual author event with Jotham Burrello, author of Spindle City. Jotham will be in conversation with Sebastian Stockman, book critic and Professor at Northeastern University. This event is free and open to the public, but you will need to register to join the Crowdcast Stream.

Copies of Jotham's book that are purchased through the event links will receive a signed bookplate.

On June 23, 1911 a summer day so magnificent it seems as if God himself has smiled on the town Fall River, Massachusetts, is reveling in its success. The Cotton Centennial is in full swing as Joseph Bartlett takes his place among the local elite in the parade grandstand. The meticulously planned carnival has brought the thriving textile town to an unprecedented halt; rich and poor alike crowd the streets, welcoming President Taft to America s Spindle City.

Yet as he perches in the grandstand nursing a nagging toothache, Joseph Bartlett straddles the divide between Yankee mill owners and the union bosses who fight them. Bartlett, a renegade owner, fears the town cannot long survive against the union-free South. He frets over the ever-present threat of strikes and factory fires, knowing his own fortune was changed by the drop of a kerosene lantern. When the Cleveland Mill burned, good men died, and immigrant s son Joseph Bartlett gained a life of privilege he never wanted.

Spindle City delves deep into the lives, loves, and fortunes of real and imagined mill owners, anarchists, and immigrants, from the Highlands mansions to the tenements of the Cogsworth slum, chronicling a mill town s and a generation s last days of glory.

Jotham Burrello is a writer, teacher, publisher, farmer, and multimedia producer. He is the author of the Writers’ e-Handbook and producer of So, Is It Done? Navigating the Revision Process. Other writing has appeared in literary journals, the Christian Science Monitor, and he’s a proud winner of the New Yorker Caption Contest. He teaches writing at Central Connecticut State University, directs the Yale Writers’ Workshop and the Connecticut Literary Festival, curates the Roar Reading Series, and is the publisher of the award-winning Elephant Rock Books. He and his wife raise boys and flowers on Muddy Feet Flower Farm in Ashford, Connecticut. Spindle City is his first novel.

Sebastian Stockman is an associate teaching professor in the English Department at Northeastern University, where he also directs the writing minor. He has written for The New York Times Book Review, The Wall Street Journal, and The Boston Globe, as well as The Millions, The Los Angeles Review of Books, and The Georgia Review. His essays have been notable selections in The Best American Essays and The Best American Sports Writing collections.

On June 23, 1911--a summer day so magnificent it seems as if God himself has smiled on the town--Fall River, Massachusetts, is reveling in its success. The Cotton Centennial is in full swing as Joseph Bartlett takes his place among the local elite in the parade grandstand.