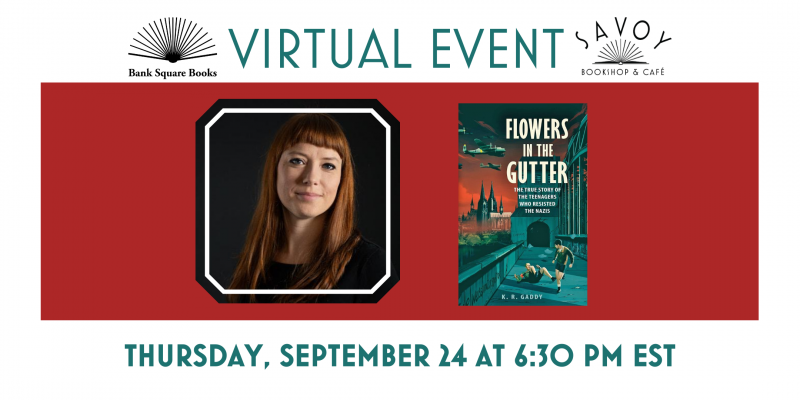 Bank Square Books and Savoy Bookshop & Café present a virtual author talk and Q&A with Krsitina Gaddy, author of Flowers in the Gutter.  This event is free and open to the public, but you will need to register to join the Crowdcast Stream.

Copies of Kristina's book that are purchased through the event links will receive a signed bookplate.

Fritz, Gertrud, and Jean were classic outsiders: their clothes were different, their music was rebellious, and they weren’t afraid to fight. But they were also Germans living under Hitler, and any nonconformity could get them arrested or worse. As children in 1933, they saw their world change. Their earliest memories were of the Nazi rise to power and of their parents fighting Brownshirts in the streets, being sent to prison, or just disappearing.

As Hitler’s grip tightened, these three found themselves trapped in a nation whose government contradicted everything they believed in. And by the time they were teenagers, the Nazis expected them to be part of the war machine. Fritz, Gertrud, and Jean and hundreds like them said no. They grew bolder, painting anti-Nazi graffiti, distributing anti-war leaflets, and helping those persecuted by the Nazis. Their actions were always dangerous. The Gestapo pursued and arrested hundreds of Edelweiss Pirates. In World War II’s desperate final year, some Pirates joined in sabotage and armed resistance, risking the Third Reich’s ultimate punishment. This is their story.

K. R. Gaddy is a freelance writer and historian. Her work has appeared in the Washington Post, Baltimore Sun, Bitch Magazine, Narratively, Proximity, Atlas Obscura, and OZY, among other publications. She received a Robert W. Deutsch Foundation Rubys Artist Grant for her writing and research.

Flowers in the Gutter: The True Story of the Edelweiss Pirates, Teenagers Who Resisted the Nazis (Hardcover)