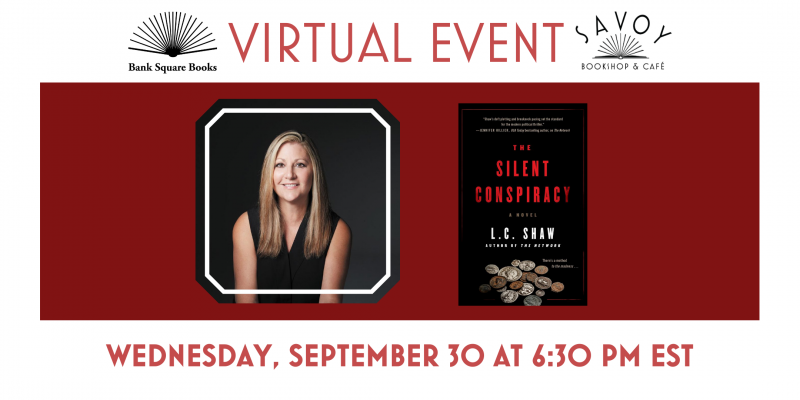 Bank Square Books and Savoy Bookshop & Café present a virtual author talk and Q&A with L.C. Shaw, author of The Silent Conspiracy. Shaw will be in conversation with bestselling author Lisa Unger. This event is free and open to the public, but you will need to register to join the Crowdcast Stream.

Copies of L.C. Shaw's book that are purchased through the event links will receive a signed bookplate.

The past is about to catch up to Jack Logan and Taylor Parks in this gripping follow-up to The Network—praised by Steve Berry as “mandatory reading for any thriller aficionado.”

It’s been almost two years since investigative reporter Jack Logan and television producer Taylor Parks brought down the Institute—the secret facility responsible for indoctrinating a generation of America’s political and media power players. Their lives are just getting back to normal, and Jack and Taylor have settled into married life with their young son, Evan.

But soon a series of bizarre, seemingly random murder/suicides captures Jack’s attention as a disturbing pattern emerges. Could someone be intentionally causing people to become homicidal? At the same time, Taylor is producing a story about a class action suit against a national insurance company that has reached the Supreme Court.

As Jack and Taylor start to suspect that their stories are connected, they realize there is something far more insidious at play that could not only directly threaten them—but the very future of the country…

L.C. Shaw is the pen name of internationally bestselling author Lynne Constantine who also writes with her sister as Liv Constantine. Their debut thriller, THE LAST MRS. PARRISH, was a Reese Witherspoon book club selection and their critically acclaimed books have been praised by USA Today, The Sunday Times, People Magazine, and Good Morning America, among many others.  Lynne’s work has been translated into 27 languages, is available in 32 countries, and has been optioned for both television and film.

Lisa Unger is the New York Times and internationally bestselling author of eighteen novels, including CONFESSIONS ON THE 7:45 (Oct. 2020). With millions of readers worldwide and books published in twenty-six languages, Unger is widely regarded as a master of suspense. Her critically acclaimed books have been voted "Best of the Year" or top picks by the Today show, Good Morning America, Entertainment Weekly, Amazon, IndieBound and others. Her essays have appeared in The New York Times, Wall Street Journal, NPR, and Travel+Leisure. She lives on the west coast of Florida with her family.

The Silent Conspiracy: A Novel (Paperback)

The past is about to catch up to Jack Logan and Taylor Parks in this gripping follow-up to The Network—praised by Steve Berry as “mandatory reading for any thriller aficionado.”