VIRTUAL: Lisa Duffy (My Kind of People) in conversation Hannah McKinnon (The View From Here) 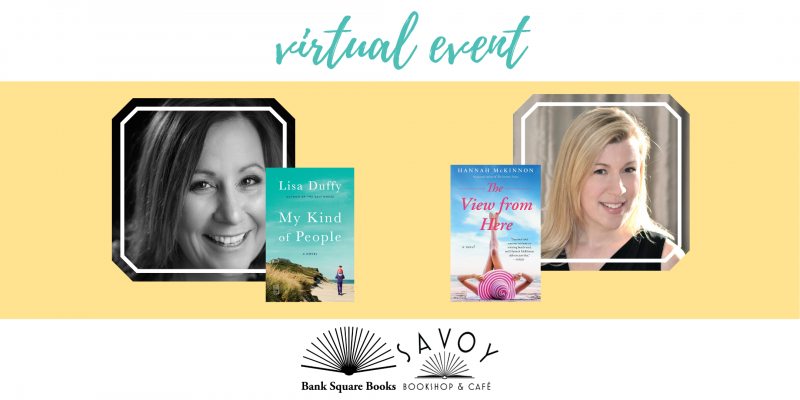 Bank Square Books and Savoy Bookshop & Café present a virtual author event with Lisa Duffy, author of My Kind of People, who will be in conversation with Hannah McKinnon, author of The View From Here. This event is free and open to the public, but you will need to register to join the Crowdcast Stream.

About My Kind of People

From the author of The Salt House and This Is Home comes a profound novel about the power of community and a small town’s long-buried secrets as a group of New England islanders come together for a recently orphaned girl.

On Ichabod Island, a jagged strip of land thirteen miles off the coast of Massachusetts, ten-year-old Sky becomes an orphan for the second time after a tragic accident claims the lives of her adoptive parents.

Grieving the death of his best friends, Leo’s life is turned upside down when he finds himself the guardian of young Sky. Back on the island and struggling to balance his new responsibilities and his marriage to his husband, Leo is supported by a powerful community of neighbors, many of them harboring secrets of their own.

Maggie, who helps with Sky’s childcare, has hit a breaking point with her police chief husband, who becomes embroiled in a local scandal. Her best friend Agnes, the island busybody, invites Sky’s estranged grandmother to stay for the summer, straining already precarious relationships. Their neighbor Joe struggles with whether to tell all was not well in Sky’s house in the months leading up to the accident. And among them all is a mysterious woman, drawn to Ichabod to fulfill a dying wish.

Perfect for fans of Celeste Ng and Ann Leary, My Kind of People is a riveting, impassioned novel about the resilience of community and what connects us all in the face of tragedy.

Lisa Duffy is the author of The Salt House, named by Real Simple as a Best Book of the Month upon its June release and one of Bustle’s 17 Best Debut Novels by Women in 2017, and This is Home, a favorite book club pick. Lisa received her MFA in creative writing from the University of Massachusetts. Her writing can be found in numerous publications, including Writer’s Digest. She lives in the Boston area with her husband and three children. My Kind of People is her third novel.

About The View From Here

From the acclaimed author of Sailing Lessons and Mystic Summer—a “charming gem of a novel” (Elin Hilderbrand, #1 New York Times bestselling author)—an evocative and moving tale about what it means to be a family, set over the course of one unforgettable Connecticut summer.

Siblings Perry, Jake, and Phoebe Goodwin were raised on the shore of a beautiful Connecticut lake in a close-knit family. The eldest of the family, forty-two-year-old Perry has long craved order as surely as his charismatic younger brother, Jake, has avoided it. Phoebe, their baby sister, courts both. As adults, the Goodwin siblings could not be more different.

Perry is as married to his career in New York as a risk analyst as Phoebe is to her college sweetheart, but both have returned to Connecticut to raise their young families. Charismatic Jake, however, has spent his years living away wanderlust and unable to settle. The three have not spent much time together…until this summer. On the afternoon of their grandmother’s ninety-seventh birthday party, the siblings reunite at the lake house where Jake stuns the family with a stranger on his arm and an announcement.

Olivia Cossette, daughter of a French chef, does not share the traditional Goodwin New England upbringing or sense of family. What she does share is parenthood, as the single mother of a little girl who does not speak. While the Goodwin family struggle to welcome the newcomers over the course of the summer, a series of bad choices made by each family member finally unravels, leaving them all to question just what truly makes a family. Can one fateful moment on a July afternoon undo a lifetime of good intentions? Only one thing is for certain—this extraordinary summer has irrevocably changed the Goodwin family and all that remains is the uncertain future.

With Hannah McKinnon’s signature “enticing and refreshing” (Nancy Thayer, New York Times bestselling author) prose, this is a warm-hearted novel that is perfect for fans of Mary Alice Monroe’s the Beach House series and the works of Elin Hilderbrand.

Hannah McKinnon is the author of, The Lake Season, Mystic Summer, The Summer House, and Sailing Lessons. She graduated from Connecticut College and the University of South Australia. She lives in Fairfield County, Connecticut, with her family, a flock of chickens, and two rescue dogs.

My Kind of People: A Novel (Paperback)

From the author of The Salt House and This Is Home comes a profound novel about the power of community and a small town’s long-buried secrets as a group of New England islanders come together for a recently orphaned girl.

The View from Here: A Novel (Paperback)

From the acclaimed author of Sailing Lessons and Mystic Summer—a “charming gem of a novel” (Elin Hilderbrand, #1 New York Times bestselling author)—an evocative and moving tale about what it means to be a family, set over the course of one unforgettable Connecticut summer.