Bank Square Books and Savoy Bookshop & Café present a virtual author talk and Q&A with Rue Mapp for the new book, Nature Swagger: Stories and Visions of Black Joy in the Outdoors. Rue will be in conversation with Evita Robinson.

Scroll down to register! 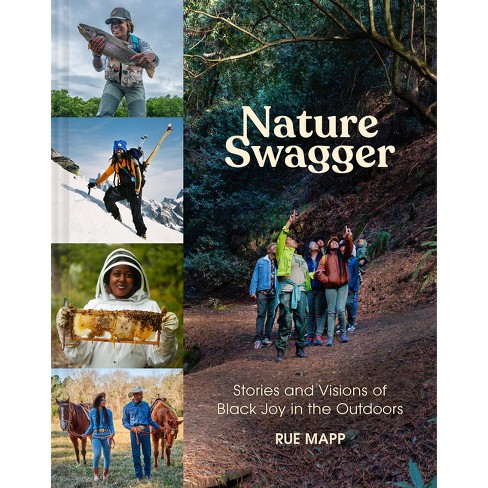 Filled with breathtaking photography, inspiring stories, profiles, and spotlights from Outdoor Afro group members, prominent Black leaders in outdoor spaces, and other organizations, this book inspires Black communities to reclaim their place in the natural world. Interspersed throughout are essays from Mapp on the rich history of Black involvement in the outdoors, activism, and conservation, as well as resources for readers who want to deepen their own connection with the elements. A perfect blend of gorgeous photographs, awe-inspiring stories, and Black history, this collection is the perfect gift for anyone looking to heal in these sacred natural spaces.

Rue Mapp is the Founder and CEO of Outdoor Afro, overseeing a carefully selected and trained staff and national volunteer team. Since Outdoor Afro's inception in 2009 as a blog, Rue has captured the attention and support of millions through a multimedia approach that is grounded in personal connections and community organizing.

Outdoor Afro is a national not-for-profit organization that has become the nation's leading, cutting-edge network in celebrating and inspiring Black connections and leadership in nature. They have offices in Oakland, CA, and Washington, D.C. and leadership networks around the country. With over 100 trained volunteer leaders in 30 states from around the country, OA connects thousands of people to outdoor experiences, and is actively changing the face of conservation. From its grassroots beginning, Outdoor Afro now enjoys national sponsorship and is recognized by major organizations for its role in addressing the ongoing need for greater diversity in the outdoors.

Evita Turquoise Robinson is a creative and cultural entrepreneur. In September 2011, Evita created the NOMADNESS Travel Tribe, an award winning online social community primarily for travelers of color. NOMADNESS was the first of its kind targeting Black and brown millennials. The group currently surpasses 30,000 international members, with over a dozen regional ambassadors.

In 2018, NOMADNESS Travel Tribe hosted their first annual festival for BIPOC (Black, Indigenous, People of Color) travelers. NOMADNESS Fest is an immersive experience that celebrates and creates safe spaces for leisure travelers, travel influencers, tour operators, and tourism professionals of color. From the success of the online group, Evita Robinson has garnered partnerships with top brands and destinations around the world. This includes Issa Rae, who she Co- Executive Produced The NOMADNESS Project web series with on YouTube in 2013.

Evita’s accolades include National Geographic’s ‘21 Most Visionary Women Throughout Travel History’, AFAR Travel Vanguard Award recipient, The Root 100, and being noted as one of Entrepreneur Magazine’s 50 Most Daring Entrepreneurs of 2018. Evita was also invited to the White House under the Obama Administration for their meeting of world's creative change makers, for SXSL (South By South Lawn). In 2017, she was inducted into the third cohort of the TED Residency, and gave her noted TED Talk that June. She now serves as a media host amplifying BIPOC communities around the world, a screenwriter and producer, keynote speaker, and diversity consultant for destinations and brands.

Nature Swagger: Stories and Visions of Black Joy in the Outdoors (Hardcover)