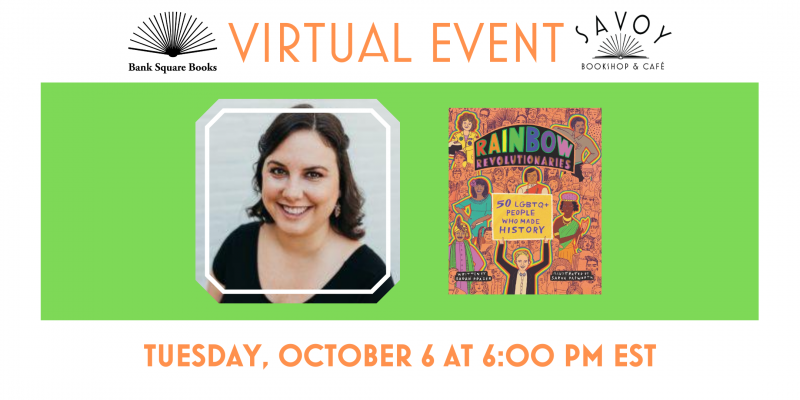 Bank Square Books and Savoy Bookshop & Café present a virtual author event with Sarah Prager, author of Rainbow Revolutionaries. This event is free and open to the public, but you will need to register to join the Crowdcast Stream.

Copies of Sarah's book that are purchased through the event links will receive a signed bookplate.

Take a journey through the lives of fifty revolutionary queer figures who made history in this groundbreaking illustrated biography collection from the author of Queer, There, and Everywhere. Did you ever wonder who invented the computer? Or who advised Martin Luther King Jr. on his nonviolent activism? Author Sarah Prager and illustrator Sarah Papworth bring to life the vibrant histories of fifty pioneering LGBTQ+ people our history books forgot to mention. Delve into the lives of Wen of Han, a Chinese emperor who loved his boyfriend as much as his people; Martine Rothblatt, a trans woman who’s helping engineer the robots of tomorrow, and so many more! From athletes (Billie Jean King) to doctors (Magnus Hirschfeld) and activists (Marsha P. Johnson) to painters (Frida Kahlo), LGBTQ+ people have made their mark on every century of human existence. This book is a celebration of the many ways these hidden heroes have made a difference and will inspire young readers to make a difference, too.

Sarah Prager is a writer, activist, and speaker on LGBTQ+ history. Her widely praised first book on the subject, Queer, There, and Everywhere: 23 People Who Changed the World, received numerous accolades, including three starred reviews and being named a Best Book for Teens by the New York Public Library and Chicago Public Library. Her second book, Rainbow Revolutionaries: 50 LGBTQ+ People Who Made History, is for ages 8–12. Prager's writing has appeared in The Atlantic, HuffPost, and many other publications. She has presented on this topic to over 130 groups across five countries, including the U.S. Embassy in Mexico City. Prager also created Quist, a free mobile app for learning LGBTQ+ history, in 2013 and was invited to the White House to contribute on LGBTQ+ tech issues in 2014. Prager lives with her wife and their children in Massachusetts.

Jessa and Ky from Groton Public Library's Queer Lit book club will be joining this event to moderate the conversation for Sarah.

Jessa (She/Her)  is the Teen Librarian at the Groton Public Library. She works with OutCT to host Queer Lit, a teen book club that celebrates the LGBTQ+ community. When not working, she can be found listening to audiobooks while walking her dog.

Ky (They/He) is Trans highscool student currently in their junior year at Wheeler High School. They are not only part of the OutCt Youth group but also a regular member of the Queer Lit book club and a strong advocate for LGBTQ+ rights. He loves to watch anime and spend time with their cats

One of Time Out's “LGBTQ+ books for kids to read during Pride Month,” this groundbreaking, pop-culture-infused illustrated biography collection takes readers on an eye-opening journey through the lives of fifty influential queer figures who have made a mark on every century of hu