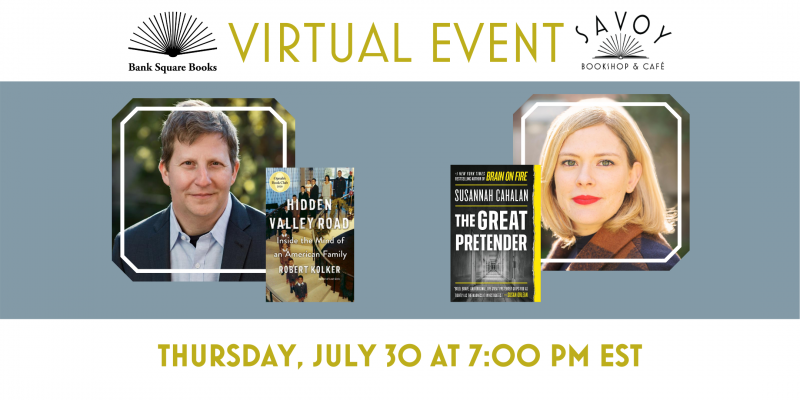 Bank Square Books and Savoy Bookshop & Café present a virtual author event with Susannah Cahalan, author of The Great Pretender, who will be in conversation with Robert Kolker, author of Hidden Valley Road. This event is free and open to the public, but you will need to register to join the Crowdcast Stream. Books ordered through the event links will receive signed book plates.

About The Great Pretender

Doctors have struggled for centuries to define insanity--how do you diagnose it, how do you treat it, how do you even know what it is? In search of an answer, in the 1970s a Stanford psychologist named David Rosenhan and seven other people--sane, healthy, well-adjusted members of society--went undercover into asylums around America to test the legitimacy of psychiatry's labels. Forced to remain inside until they'd "proven" themselves sane, all eight emerged with alarming diagnoses and even more troubling stories of their treatment. Rosenhan's watershed study broke open the field of psychiatry, closing down institutions and changing mental health diagnosis forever.

But, as Cahalan's explosive new research shows in this real-life detective story, very little in this saga is exactly as it seems. What really happened behind those closed asylum doors?

Susannah Cahalan is the award-winning, New York Times bestselling author of Brain on Fire: My Month of Madness, a memoir about her struggle with a rare autoimmune disease of the brain. She writes for the New York Post. Her work has also been featured in the New York Times, Scientific American Magazine, Glamour, Psychology Today, and other publications. She lives in Brooklyn.

The heartrending story of a midcentury American family with twelve children, six of them diagnosed with schizophrenia, that became science's great hope in the quest to understand the disease.

Don and Mimi Galvin seemed to be living the American dream. After World War II, Don's work with the Air Force brought them to Colorado, where their twelve children perfectly spanned the baby boom: the oldest born in 1945, the youngest in 1965. In those years, there was an established script for a family like the Galvins--aspiration, hard work, upward mobility, domestic harmony--and they worked hard to play their parts. But behind the scenes was a different story: psychological breakdown, sudden shocking violence, hidden abuse. By the mid-1970s, six of the ten Galvin boys, one after another, were diagnosed as schizophrenic. How could all this happen to one family? What took place inside the house on Hidden Valley Road was so extraordinary that the Galvins became one of the first families to be studied by the National Institute of Mental Health. Their story offers a shadow history of the science of schizophrenia, from the era of institutionalization, lobotomy, and the schizophrenogenic mother to the search for genetic markers for the disease, always amid profound disagreements about the nature of the illness itself. And unbeknownst to the Galvins, samples of their DNA informed decades of genetic research that continues today, offering paths to treatment, prediction, and even eradication of the disease for future generations. With clarity and compassion, bestselling and award-winning author Robert Kolker uncovers one family's unforgettable legacy of suffering, love, and hope.

The Great Pretender: The Undercover Mission That Changed Our Understanding of Madness (Paperback)

Hidden Valley Road: Inside the Mind of an American Family (Hardcover)

The heartrending story of a midcentury American family with twelve children, six of them diagnosed with schizophrenia, that became science's great hope in the quest to understand the disease.