Savoy Bookshop & Café and Westerly Library present a Local Author Spotlight featuring four nonfiction authors from our area: David Cundy, the author of Inappropriate Anagrams; Robert McWilliams, the author of The Kiss of Sweet Scottish Rain; Steve Starger, the author of Misfits & Supermen: Two Brothers' Journey Along the Spectrum; and Jim Beloff, the author of the palindrome book One's Reverses, Reverse. No? Each author will present his new book and sign copies for anyone interested in purchasing one. The event is free and open to the public, and Savoy will donate a portion of each book sale to the library.

David has read at the St. Mark's Poetry Project's New Year's Day Marathon Reading, and at Triple Canopy's The Making of Americans Gertrude Stein Marathon. He has interviewed some of America's most esteemed poets, including Galway Kinnell, former U.S. Poet Laureate Robert Pinsky, and Marie Ponsot, and reviewed collections by Nobelist Wislawa Szymborska and Ursula K. Le Guin and Jean Valentine, among others.

David has designed type at Linotype in New York and with Matthew Carter in London. He was a protégé of Paul Rand at Yale. His graphic design firm, Design Trust, has created graphics for many major organizations, including the Brooklyn Museum, Columbia University and Parsons School of Design. David has served on the board of directors of the New York Chapter of the American Institute of Graphic Arts and has taught in Yale's graduate graphic design program. As an educator, David has taught media at Fairfield University and others.

About the Book: Anagrams - the shuffling of letters in words or phrases to create new ones - come in two flavors. Conventional anagrams, relevant quips that pertinently describe their subjects, are no match for inappropriate ones, which stimulate our imaginations by surprising us with witty, unexpected connections. Inappropriate anagrams are endlessly entertaining - humorous, nonsensical, dreamlike, and even a bit psychedelic. They jog our brains and make us laugh. Poetic biographies of forty world-famous luminaries - including Cleopatra, Mona Lisa, Mary Shelley, Sigmund Freud, Albert Einstein and Superman are constructed using inappropriate anagrams in this light-hearted premiere collection of "shenanagrams" (a new form of poem analogous to limericks). Readers will marvel at the sounds, silliness and shenanigans of literally hundreds of anagrams. The poetry in Inappropriate Anagrams is playfully complemented by the author's sharp, laugh-out-loud anagram collage portraits, which bring the subjects' secret alter egos to life. Whether depicting Tiger Dentures or a Bat Riot Expert, Inappropriate Anagrams will brighten every reader's day. 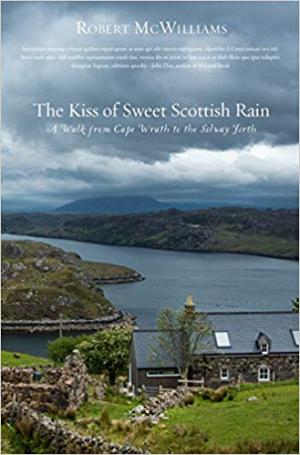 About the Author: Robert McWilliams was born in Glasgow, Scotland, but moved with his journalist father’s job to the south of England at the age of three. Rob graduated from Wadham College, Oxford, with a BA Hons. in Modern History. After university, he worked as a tour guide and English teacher in France and Spain, before joining Reuters news agency in London. Rob spent 16 years at Reuters as a business manager in Hong Kong, Japan, the US, Venezuela and Brazil.

For nearly 20 years, Rob has lived in Connecticut with his wife and daughters, and is now a US citizen. Tired of corporate life, he quit his job to fulfill a stubborn ambition to walk the length of Scotland. He has contributed the Taking a Hike column to local newspapers every month for five years. Taking a Hike placed second in the general column category of the 2017 Connecticut Press Club awards.  Rob has also written for A.T. Journeys, the official magazine of the Appalachian Trail, and Ctvisit.com. The Kiss of Sweet Scottish Rain is his first book.

Rob enjoys hiking, and travel off the beaten track. He does consulting work on information privacy, and volunteers with the Nature Conservancy, Appalachian Trail and other outdoor causes.

About the Book: From Cape Wrath in the lonely northwest to a muddy estuary overlooking England, The Kiss of Sweet Scottish Rain takes the reader on a walk across Scotland. For Rob McWilliams–Scots-born but exiled since childhood–the walk is an obstinate ambition, and the start of a new direction in life.

McWilliams crosses wild and beautiful landscapes, meets an ever-changing cast of companions, and passes through communities from remote hamlets to the smiling, but rough-edged, city of Glasgow. Around every corner, he explores Scotland’s turbulent history and unique cultural and natural heritage, from the Gaelic language, to the fearsome Highland midge, and how the Stone of Destiny–an ancient coronation symbol – could now reside in an unassuming Glasgow pub.

Struggling with terrain, injury, atrocious weather, and above all his own fragile confidence, McWilliams weaves into his narrative the threads of his life that led to the journey, and discovers that the rewards of adventure are rarely those that were anticipated.

The Kiss of Sweet Scottish Rain informs and entertains. As well as a ben or a castle, there is usually a joke just around the next turn in the trail. 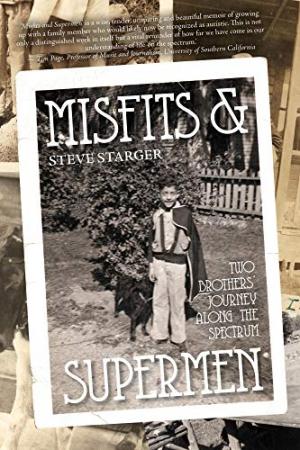 About the Author: Previously short-listed for the Will Eisner Award for his biography of comic-book artist Wally Wood (co-authored by David Spurlock), retired professional musician and journalist Stephen Starger hopes that Misfits and Supermen: Two Brothers' Journey Along the Spectrum-his personal story-will help other people dealing with psychological disorders to realize that they are not alone, and find solace, empathy, and insights into their personal and familial situations.

About the Book: The bond of brotherhood is hard to break, but a lifetime of dealing with familial expectation, bitterness, and psychological disorders can bend and warp it into something nearly unrecognizable. This story tells the tale of two brothers: Melvyn, the elder, whose amalgamation of disorders leave him completely unable to function within society; and Stephen, the younger, whose own emotional and psychological issues are overshadowed to the point where he becomes little more than a pale and twisted reflection of his brother.

On different ends of the same spectrum, Melvyn is blissfully unaware of their troubling connection (or so his brother can only assume), but for Stephen, it is undeniable. He lives with it every day, sensing his own otherness in every twitch, outburst, and inability of his brother to overcome his inner demons. Left largely on his own to deal with his peculiarities—while carrying the burden of being “the normal one,” of whom much is expected— Stephen begins a complicated and unpredictable journey, one which will take him as far from his brother as he can manage to get, even as it brings them inexorably closer. 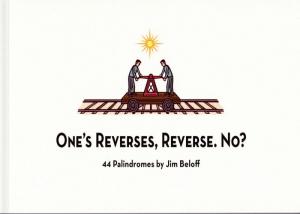 About the Author: Jim Beloff is the author of The Ukulele—A Visual History and with his wife, Liz, publishes the popular Jumpin’ Jim’s series of ukulele songbooks including The Daily Ukulele, one of the best-selling ukulele songbooks ever published. His ukulele concerto, “Uke Can’t Be Serious” has been performed many times, most recently with the Michigan Philharmonic. Based in Connecticut, Jim and Liz perform together regularly throughout the USA, playing their family-made Fluke, Flea and Firefly ukuleles. They believe in their company’s motto, “Uke Can Change the World.” www.fleamarketmusic.com and facebook.com/jimbeloffmusic.

About the Book: One’s Reverses, Reverse. No? by Jim Beloff is a limited-edition book of his palindromes; sentences that read the same way forward and backward. The author has been composing palindromes for over 30 years and this book features 44 of his favorites. One of them, “Lapses? Order red roses, pal.,” has been included in articles about palindromes and has been anthologized in wordplay books. There are several things that make this collection unique. One is that the palindromes start small as in “Same Nice Cinemas” and then grow in length to, for example, “Raw, sore, hot, nosy, aware I’d lose no one, soldier a ways on to hero’s war.” Also, all of the accompanying illustrations by Scott Baldwin are symmetrical. About the book, Will Shortz, New York Times Crossword Puzzle Editor, said: “Some of the best illustrated palindromes I've seen. The palindromes make sense, and the pictures are funny!” Only 250 numbered copies of the book are in print.