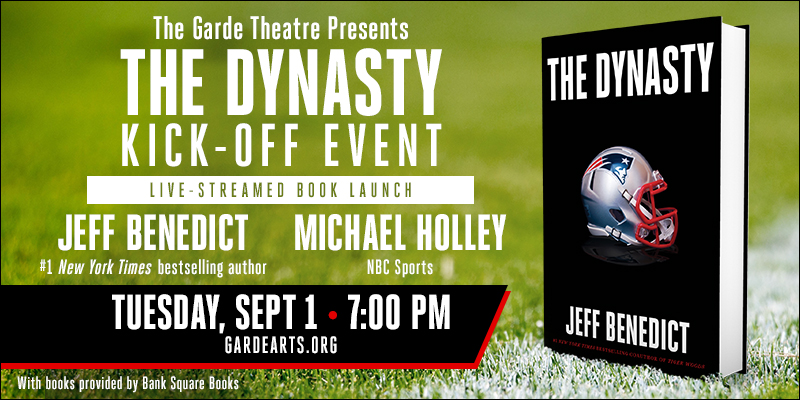 The Garde Arts Center presents a virtual book launch for New York Times bestselling author Jeff Benedict's new book, The Dynasty. Jeff Benedict will be moderated by Michael Holly, anchor for NBC Sports Boston. Tickets for the event include a signed copy of The Dynasty and a link to stream the virtual event.

Books for this event are provided by Bank Square Books in Mystic, CT.

Streaming live from Boston MA and New London, CT –  in the room at the Garde Arts Center where the book was written – watch the national kick-off of the new book The Dynasty, the definitive inside story of the New England Patriots—the greatest sports dynasty of the 21st century.

Each ticket includes one signed copy of The Dynasty dated 9/1/2020 (date of publication) and a private link to the Virtual Book Launch.

From the #1 New York Times bestselling coauthor of Tiger Woods comes the definitive inside story of the New England Patriots—the greatest sports dynasty of the 21st century.

How was the Patriots dynasty built? And how did it last for two decades? In The Dynasty, acclaimed journalist Jeff Benedict provides richly reported answers in a sweeping account based on exclusive interviews with more than two hundred insiders—including team executives, coaches, players, players’ wives, team doctors, lawyers, and more—as well as never-before-seen recordings, documents, and electronic communications.

Jeff Benedict is the bestselling author of sixteen nonfiction books, including the #1 New York Times bestseller Tiger Woods, with Armen Keteyian. He has also been a special-features writer for Sports Illustrated and the Los Angeles Times, and his essays have appeared in the New York Times. His stories have been the basis of segments on 60 Minutes, CBS Sunday Morning, HBO’s Real Sports with Bryant Gumbel, the Discovery Channel, Good Morning America, 48 Hours, 20/20, the NFL Network, NPR, and ESPN’s Outside the Lines. He is also a television and film producer. He lives with his wife and four children in Connecticut.